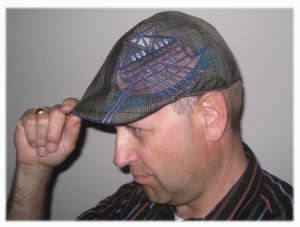 There is some cool art on the hat. A viking ship. Click on the foto to enlarge

I visited Roberta’s Hats today in Victoria, BC. This is my favorite hat store. I found a cool hat there that the staff said was a “limited edition”.  Quite Funky.  It’s a Goorin Bros 1333 Minna.    Roberta’s Hats (On Government Street, just north of Parliament about 4 blocks) is a very nifty hat shop.  I have bought many hats here over the years.  One of the niftiest things they do when you buy a dressier men’s hat – is match up a feather for your hat. The hat could be $100, but when they go through their selection of feathers and match up JUST THE RIGHT COLORED FEATHER for your hat – that fifty cent feather seems to be the coolest thing ever.

My new Goorin Bros. hat is apparently a “limited edition”.  I don’t know what that means but it sure beats your average ball cap.

2 responses to “My Fav Hat Store”