Kevin Hilgers has been a Rotarian since 1997, starting with the Rotary Club of Grande Prairie, 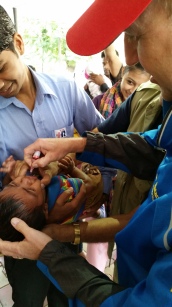 Alberta, Canada, transferring to Rotary Club of Victoria-Harbourside in early 2018.  His wife and best friend is Janice McNeice. Their 2 daughters have also been a part of Rotary.  Catherine  was a Rotary Youth Exchange student in Brazil, she resides in Berlin.  Karly Jasper was a Rotary Youth Exchange student in Japan until the earthquake of March, 2011.  Following that, she finished her exchange in Brazil.  She now resides in Portland, USA.

Kevin was in broadcasting for 15 years hosting radio shows in Western Canada.  He is an entrepreneur with rental properties and other business interests in Victoria, British Columbia.

Kevin was District 5370’s youngest Governor in 2012/13.  Highlights from the year include the Million Dollar Dinner where four million five hundred thousand dollars was raised for the Rotary Foundation.  Following 12/13 the District received two awards at the Zone Institute in Philadelphia;  District with highest membership increase in the Zone,  and District that formed 2 or more clubs. 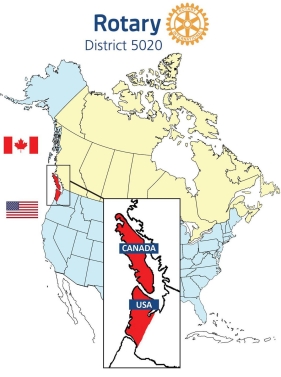 Where in the world is District 5020? Click to enlarge. Look for red. Vancouver Island, Canada and parts of Washington state, USA.

Kevin says “My family and I have received so much from Rotary I don’t think I could ever pay it back.  But I’m certainly going to try”.

He is now in a new Rotary Club, (Victoria-Harbourside) a new Rotary District (5020) a new Rotary Zone (25/26) and excited to take on fresh challenges and opportunities to serve and inspire, including being active with Rotary Friendship Exchange (www.rotary5020.org/rfe) and club membership growth. 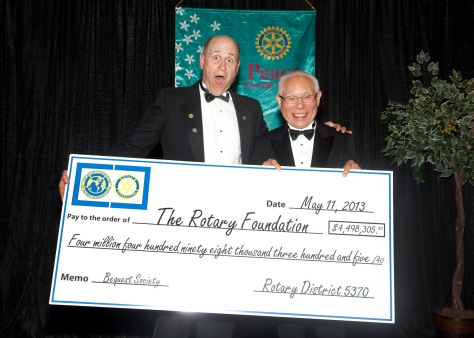 Lots of smiles with 2012/13 President of Rotary International Sakuji Tanaka as 4.5 million dollars is raised at the Million Dollar Dinner.

Rotary unites more than a million people.   Together, we see a world where people unite and take action to create lasting change – across the globe, in our communities, and in ourselves.

We take action locally and globally.  Each day, our members pour their passion, integrity, and intelligence into completing projects that have a lasting impact. We persevere until we deliver real, lasting solutions.

No challenge is too big for us.  For more than 110 years, we’ve bridged cultures and connected continents to champion peace, fight illiteracy and poverty, promote clean water and sanitation, and fight disease.