Karly gets a hug at Grande Prairie Airport

I could not post on the blog about Karly and her Rotary Youth Exchange in Japan until now..  Now she is safe at home. The past 7 days have been, well – hard.  We are so grateful to have Karly home, yet so worried about what she left behind.   Host families,  host brothers and sisters, her Rotary Club, her school mates.  She was able to say good-bye to her host families and school principal, but not her friends or host Rotary Club.

Since August, 2010 Karly lived in Koriyama, Fukushima – 60 km’s away from the Fukushima power plant.  So when the earthquake hit we thought at first she would be staying, but it became obvious within a few days the danger from the plant was growing.

We are so thankful to Karly’s host dad.  I think he had enough to worry about – yet he drove for 7 hours from Koriyama to Tokyo using back roads, the main highways or trains were not an option.  After dropping Karly and another exchange student at the airport – Karly was airbound 4 hours later.  The other exchange student though didn’t leave for 24 hours.  Karly’s host dad refused to leave her side until she too was safe on the airplane.  He stayed with her another 24 hours in the airport.  He is our hero.

We have so many people to thank.   In Grande Prairie a complete stranger in the airport with he little daughter and husband  hugged Karly and started crying.   Rotarians were also heroes.  Three of the District Youth Exchange Team met Karly at the Edmonton airport and stayed with her for 3 or 4 hours during her lay over.     Before that many Rotarians from our area and elsewhere stood by with efforts and support.

Karly is doing great.  Yesterday she said she wanted to put efforts towards Japan fundraisers.  I know she will make this a positive where possible.  She is speaking for instance at an Interact (Rotary Club for youth) Charter Evening and Japanese fundraiser April 1 in Peace River.

Karly along with her Mom and Dad are pondering what the next 3 or 4 months holds before she attends grade 12 this fall.  (Youth Exchange years do not count education wise so she will be a year older and far wiser in grade 12 year).  She is thinking some studies,  some work and correspondence.  And, being a 17-year-old no doubt.

We have so many people to thank for their support.  It has changed our lives I know.   The Daily Herald Tribune did 2 stories.  Remo Zaccagna is an amazing writer with tact and care.

Part of the process of moving forward in life is sharing.  So thank you for allowing us that.

UPDATE:  Rotarians in Brazil offered to take any exchange student that had to leave Japan.  What an offer.  We have accepted and Karly departs April 18 for Brazil.  She will be there till August.

In return Rotary Clubs in Grande Prairie offered to host Brazilian exchange students who had to return from Japan.  (There were a couple in Japan from Brazil).  One has accepted and Luiza should be in Grande Prairie by early May. 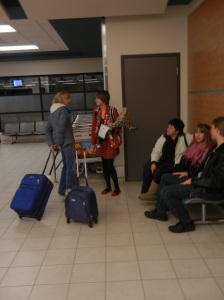 A family in the airport visits with Karly and discusses her ordeal. More tears. 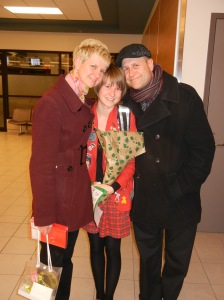