It was quite an honour and thrill to receive the Queen Elizabeth II Diamond Jubilee Medal, in Red Deer.    I was nominated by Premier Redford in large part due to my role as Rotary District Governor for the year in District 5370.  Jan and I drove to Red Deer as the date worked for us and we were residing in Edmonton at the time for our Rotary duties.    There was a ceremony where around 30 received the medal.  The Premier and Lieutenant Governor of Alberta handed out the medals.  Jan and I took along a Rotary Youth exchange student with us,  Elly from Taiwan.  She was also thrilled to meet these people. 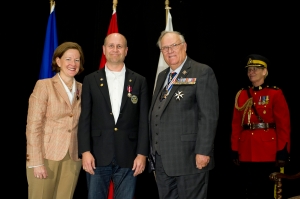