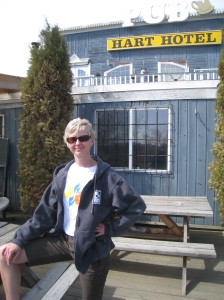 The Hart Hotel, Pouce Coupe BC. Click to enlarge

Jan and I went to Dawson Creek BC for a bike ride and day excursion.  Every time we have driven through we have never stopped in this quirky little town called Pouce Coupe, just inside the BC border.  We saw a deck on a bar so we stopped in.  Shandra lived there and operated the Hart Hotel and Pub.  Built in 1928 and named after the first white settler in the area – Jim (?) Hart.  Same guy they named the Hart Highway after.  Pouce Coupe was named after a First Nations Chief.  The name is french for “cut thumb”.   It was originally named ‘Pouskapie’s Prairie, after the name of the local native band chief.

Anyhow after some wine (white nice and cold, so was my red…) we headed for Dawson Creek where we unloaded the bikes and did some nice cycling through the town and around

Wow, we really do live up North.